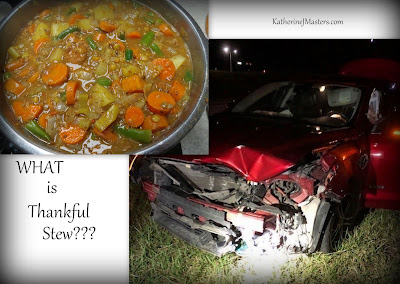 Last night, we received one of those horrible calls telling us that two of our adult children had been in an accident after hitting a deer. It was dark on a highway, and they were going 70 mph when a deer ran right in front of them.

Our family is close... and we all headed for the accident site... married son and his wife from one direction.... another son from another direction had just ordered pizza and was headed to get it, but diverted to drive the 30 minutes to the site. My husband and I and 2 of our other kids headed out from another direction to drive the 30 miles. (That was a LONG 30 miles!). Details were sketchy.... we just knew that the car was totalled. 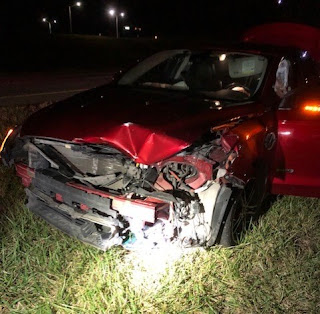 Married son and his wife got to the scene first as they were only about 15 minutes away. They called and said our daughter was sore, but okay and son looked awful with black eye, cut and bleeding hand. Police had arrived on scene...... Second son arrived a bit later... we were about 10 minutes out still... learned more and became more anxious to get there. Found out police objected to the 2 vehicles on site and said we couldn't come. Oh, my.... Panic for all as I needed to evaluate injuries and because we all wanted to be together. Driving by the accident site was hard ... and we really couldn't see anything except for the car in the median and police lights because it was so dark.

Talk on the phone with those on site brought the plan of running to the closest store a few miles away and getting frozen peas or corn to use as ice bags for the injured. We rushed to an Aldi and the son and daughter with us, ran inside... no peas, corn or mixed vegetables, but they were able to get 2 bags of frozen green beans. They rushed to the checkout where a nice person let them go ahead since they only had 2 things, Son thanked them and said it was for an emergency. The lady told the cashier to just charge her for them and told our son and daughter to go... and she would be praying and hoped the family would be okay. What a blessing on a very hard evening. 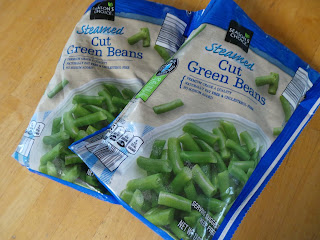 Back in the van, we went to the accident site which was from the other direction... and pulled off the highway on the median enough to let me, our son, the big flashlights, green beans and first aid kit out, then husband and daughter went to next exit and pulled down exit ramp to be close enough to see lights though it was too dark to see anything else. Checking my kids over, touching them, seeing them, was a relief... and it also set in as to what had happened, especially when I saw the inside of the car with the blown airbags. While waiting for the tow truck, they kept busy trying to figure out the accident pattern, looked for vehicle parts and tried to figure out the accident path. The officer had left by then and it was really dark, other than the flashing lights on my sons' trucks and flashlights. I called my husband on the phone and updated him as we found out more... and on the physical condition of our kids. Son kept saying he was fine, but looked awful... plan was to evaluate in better light... since he was able to function.

When the tow truck finally came and pulled the car up on the truckbed with a winch, my guys discovered the missing front bumper... it was under the car. My son did a good job of keeping some control of the car, but the deer hit happened and air bags blew, so they couldn't see... reconstruction showed what happened. They came close to hitting guard rails next to the bridge abutment, then into the median where a metal culvert was in place which they hit, went airborne and landed... and finally stopped. Oh my!

After the tow truck left, we all got in the 3 vehicles and left to go to Walmart to use the bathroom, see that everyone was okay and get into the correct vehicles to head home(no one could get into the van with my husband since we couldn't cross the highway.). The 9 of us stood in a circle in the front of Walmart as my husband prayed and we thanked God for His mercies. My son who had ordered the pizza had received a call from the pizza place that his order was ready... while at the accident site. He told them he couldn't come to get it because of the accident. The manager told him they would just refund the money he had paid and he hoped all went well. So nice to have kind people, especially on such a rough evening. 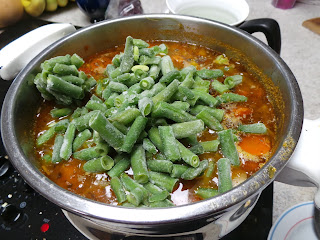 A rough evening.... but we could be planning a funeral or two of them today... but we aren't. That's where the "Thankful Stew" comes in. I made homemade stew and also used those green beans bought for us by that precious woman. Tonight, we will have stew and maybe cornbread... and we will continue to thank God. 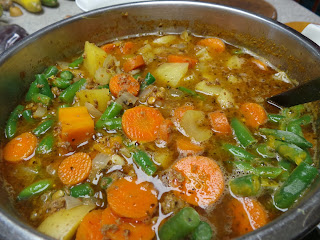 Son and daughter are very sore today.. son was determined to go to work today and he did. I appreciate his work ethic, but do not think he should have gone. He is an adult though and so I just watch and pray. His eye is very bruised from his glasses... those airbags sure did a lot of damage, but maybe they saved my kids from worse damage. We are thankful. 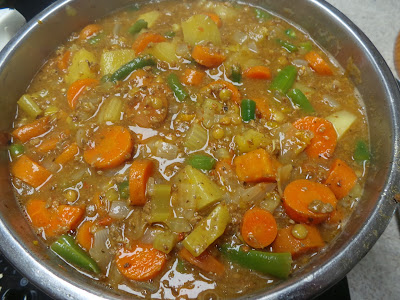 One of my sons works at a body shop and has said many times in the last month that they have been swamped with deer hits... and to be careful. He said this is more than they normally see... and the totaled car was towed to that body shop... they also had another vehicle towed in from a deer hit, today. He said that the damage seems worse this year... the deer hit cars are damaged worse than usual.. my son's had 6 airbags blow, which represents a lot of money.

We are still learning more about the accident as they remember more... it all happened so fast and they keep going over it trying to remember it all. One thing we learned was that a man who was driving near them, stopped right after the accident, saying he had seen the whole thing and was willing to be a witness if he was needed. He gave my son his contact information. God sure put several people in place to bless us last night.

Anyway, we are thankful, so we are having "Thankful Stew". (By the way, my daughters just tested the stew and said it was great... and one of them made cornbread to go with it.) We thank God for His mercy to us last night and will sure enjoy the "Thankful Stew", in a few minutes, and cornbread with family together as we remember the blessings among the difficulties of the accident.

Thank you for visiting... I would love to have you follow my website... just leave your email address... it's free and I would also love to hear from you.

My book, New Beginning at Rosewood is on sale from Amazon. If you're intersted, go to Amazon to order it, or use the link below: 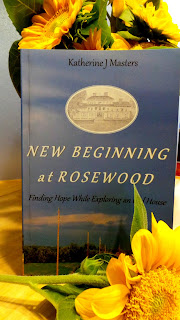 I'd love to hear what you think of the book: what characters you like best and if you also found hope while reading it or favorite parts of the book. 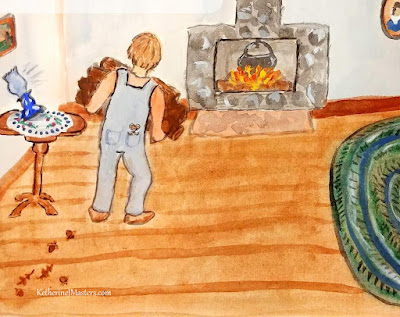